[The following is the another of many older articles that will appear on my website. This is article was first published in Midwest Outdoors in April of 2015. See Part II here. Please share what you learn from these articles with your whitetail hunting friends.] 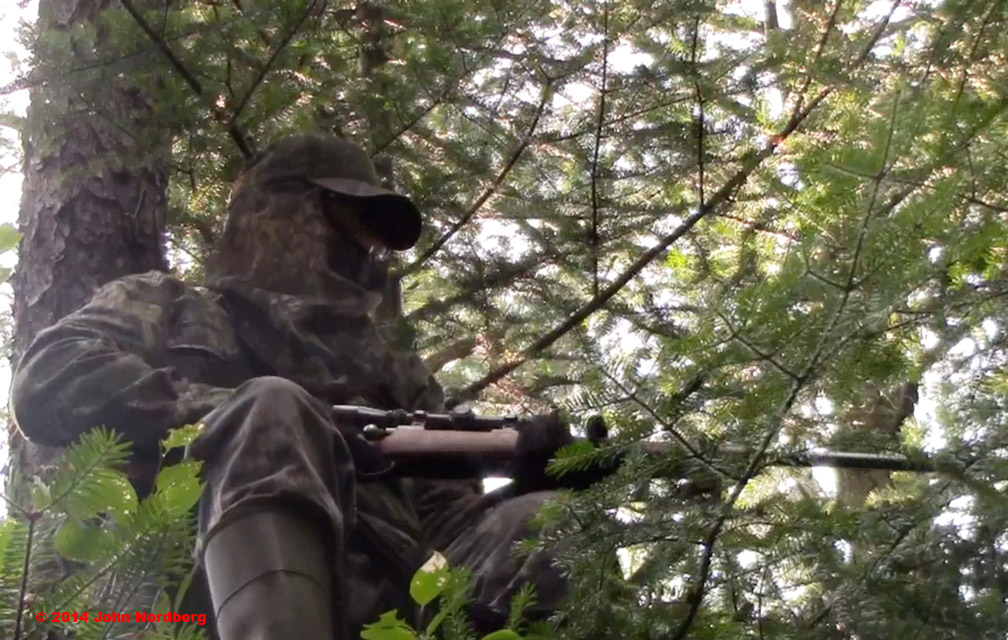 Doc in a treestand with his headnet on.
(Taken during the making of Do-It-Yourself Black Bear Baiting and Hunting, Third Edition)

Strangely, if your silhouette is not obvious while stand hunting (on the ground or in a tree), if the skin of your face and hands is not exposed, if you are downwind or crosswind and if you have been motionless and silent for thirty minutes or more, a passing deer of any age or sex is unlikely to notice you, even while less than ten feet away. Despite this failing of whitetail vision, most hunters rarely see it happen for three reasons: 1) they are unable to remain motionless thirty-plus minutes, 2) they are unaware of the hunting advantage 30-plus minutes without discernable motion can provide and/or 3) they do not realize eyes of whitetails are extremely sensitive to motions. Whitetails can readily spot movements made by hunters up to one-hundred yards away through minute openings in forest cover and up to a mile or more away in open areas such as farm fields or clear cuts, day or night. Whether made by a chickadee, man or moose, whenever a movement (not caused by wind) is spotted by a whitetail, the deer will generally halt and freeze to study the site where the movement occurred, bringing to bear all of its senses, until satisfied the movement was not made by something dangerous. This can take 15–30 minutes, sometimes longer if additional suspicious, unidentified motions or sounds are detected.

During such an encounter, the balance is soon likely to tip in favor of the deer. A human hunter who is unaware this is happening, which is most often the case, will soon make another movement that will make identification certain.  Even while aware this is happening, few hunters have the patience to remain motionless long enough to convince an experienced whitetail nothing of any consequence is at or near site where the motion was spotted. Most hunters will begin raising their weapon and turning their bodies if necessary much too soon, typically triggering a quick-as-a-wink escape by the ready-to-bolt deer.

Because it is so difficult for whitetails to identify motionless, silent and downwind or crosswind hunters, stand hunting should be the most successful of all hunting methods. Back in the 1970–80s when elevated stands first became popular, it was, but then things began to change. By 1990, most older whitetails had quit ignoring airborne odors drifting downwind (drifting vertically as well as horizontally) from tree stand hunters they could not see or hear on the ground. Upon realizing humans wait in ambush in trees as well as on the ground, they began routinely searching ahead for telltale movements and dark silhouettes of humans in trees as they traveled from place to place.

Having rediscovered ground level stand hunting (sitting on a portable stool hidden by natural cover) many of today’s deer hunters have learned it is relatively easy to hide their silhouettes from eyes of whitetails at ground level.  But, being humans, creatures that find it difficult if not impossible to remain motionless for long periods of time, telltale motions continue to be the bane of most stand hunters (including myself). Stand hunting and whitetails have thus evolved to the point that stand hunting success is now almost wholly attributable to how motionless the hunter can remain while hunting.

How motionless do you have to be? This is difficult to gauge because the consequences of uninhibited movements by stand hunters are seldom realized. Fifteen forest deer or twenty-three farm deer living in a square-mile (common numbers) surrounding a stand hunter can discover and begin avoiding that hunter within a few hours without the hunter realizing it. It happens all the time. Most alerted deer two years of age or older are capable of sneaking away without being seen or heard.

Remaining adequately motionless until an unsuspecting buck (or other deer) approaches within easy shooting range is admittedly difficult. I’ve been hunting whitetails for 70 years, bucks only for 45, and still haven’t mastered it. The best I can personally hope for is accomplishing it at least once per hunting season. If you can do this, your hunting partners and others will soon begin to believe you are an exceptionally knowledgeable and skillful whitetail hunter.

Each fall my first step in my quest to keep from being spotted by whitetails because of unavoidable motions is to scout for 4–6 ground level stand sites for the first three days of the hunting season, spots where I feel I am not likely to have to wait long hours to take a buck (Minnesotans, see “No-Luck-Needed Bucks” in the Minnesota Section of the March Edition of Midwest Outdoors). My goal each season is to take a buck during the first 2–3 legal shooting hours of a day — before sitting without motion becomes physically agonizing, before stretching, turning or shifting my position on my stool becomes necessary, before shivering begins and freezing fingers and toes become painful on frigid mornings, before thirst forces me to drink water, before the need to visit a latrine can no longer be ignored or before I begin struggling to avoid falling asleep. To maximize my odds of taking a buck during those first few hours, I get to my stand sites in the morning at least thirty minutes before first light so I won’t miss a minute of those first, most productive hunting hours.

While scouting I search for natural cover tall and dense enough to hide my entire body up to my neck while seated on my stool, preferably where I’ll have a fairly solid background taller than my head behind me — a dense stand of evergreens with boughs hanging to the ground, a large fallen evergreen, dense brush, a mass of large-diameter tree trunks, a large boulder, deep grasses or a steep bank or hillside. With my head covered with a camo headnet (or mask), my camo blaze-orange cap on top, deer passing downwind or crosswind will not identify me as long as my exposed head remains motionless.  Two of the biggest bucks I have ever taken were standing broadside within 50 yards while I was seated behind mere six-foot-tall pines and peering at them between dense evergreen boughs. The motion masking cover I select generally allows me to stretch my legs and arms, lean back to stretch my back, change my position on my stool and prepare to fire my rifle (or bow) without these movements being seen by nearby deer. The only altering I do of natural features at a stand site is clean up or stamp flat grasses where I plan to sit and place my feet, a patch long enough to allow me to stretch my legs or change positions on my stool without making telltale movements or sounds. I make no other changes about my stand sites (no shooting lanes), doing nothing that might arouse the suspicion of an approaching buck.

Virtually every buck I have taken since I began stand hunting at ground level 25 years ago had no idea I was near. Thus they were all standing still or walking slowly when I fired (easy targets). What about bucks that did know I was near because of spotted motions? Find out what happened and what I did to avoid making more of such mistakes next month.