The Making of a Buck Hunter

[The following is the another of many older articles that will appear on my website. This is article was first published in Midwest Outdoors in March of 2014. Please share what you learn from these articles with your whitetail hunting friends.]

First light was minutes away on Sunday morning of our second weekend of our past firearm deer hunting season when my grandson Tyler climbed to the platform of his cousin Ryan’s treestand. [Published in 2014 — referring to 2013.] Ryan was now back in college. About a quarter past seven he began hearing light footsteps in the crunchy snow behind him. A couple of soft twig-snaps made it obvious those footsteps were being made by something heavy, almost certainly a deer.

Having suffered the agony of missing opening weekend because his music major obligated him to play his trombone in Christmas concerts at the U of M Duluth Branch, this first approach of a whitetail was especially exciting. Not daring to move, hardly breathing, Tyler waited anxiously, hoping the deer was a buck (the only whitetail legal in our hunting area this past year).

The deer began angling away on his left — an awkward location for a left-hander. When its head finally came into view, Tyler could see the strange six-point antlers his father had described earlier: brow tines on deeply-forked main beams that curved outward and then dipped downward as they arched forward. Both his dad and Uncle Ken had passed up this buck opening weekend, being what they both decided was “a mere yearling.”

After eight days of hunting, there were only two bucks hanging in camp, the one his dad took yesterday and the one his grandfather (me) took opening weekend. Tyler therefore decided to heed his grandfather’s advice, “Take anything with antlers.” But just before the buck approached a location where Tyler could finally bring his rifle to bear without being seen, it turned and disappeared into a clump of balsams, never to be seen again.

About 30 minutes later, Tyler again heard approaching footsteps. This time they were on his right. Unfortunately, when the deer stepped into a nearby opening, it lacked antlers.

Just before 8:30 a.m., a commotion in dense forest cover out in front of him got Tyler’s attention. A glimpse of something tan soon revealed a deer was heading his way. When it finally stepped through a narrow opening about 30 yards away, Tyler sucked in a breath. It was big buck, a 4-½- to 6-½-year-old for sure. It looked considerably larger than the last buck he took about 200 yards southeast of where he now sat; that one was a nice eight-pointer. [Below is a photo that “Birch Mountain” buck.] 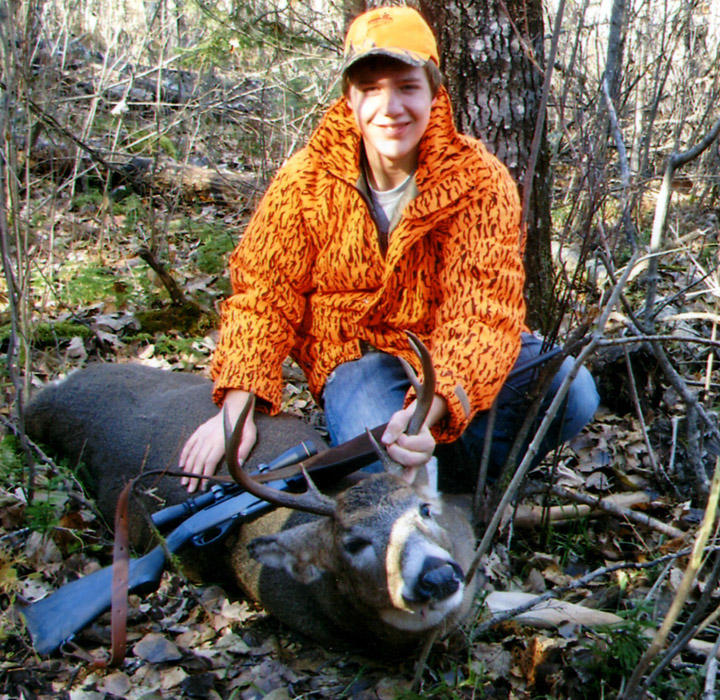 It was angling away downhill through very dense brush when he first spotted it. Fortunately he was in a treestand where his odds of finding a clear opening for a shot were much better than they would have been at ground level. The moment the buck stepped into an opening about 75 yards away, Tyler squeezed his trigger and the buck went down. The buck now in front of him was not quite as large as his first buck, the 300-plus-pound, eight-pointer with heavy antlers now on a wall back home. [Below is a photo Tyler’s first buck.] 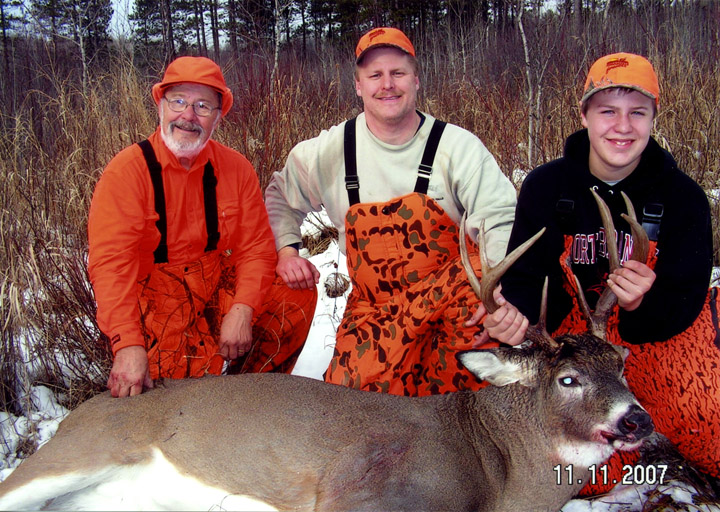 That buck had walked steadily toward him from behind his treestand located in an island of uncut timber out in the middle of a three-year-old clearcut. When directly beneath his platform the buck somehow identified him and broke into 25-foot-long, eight-foot-high bounds, fleeing south. Tyler’s shot somehow missed scores of intervening aspen saplings before angling through the buck’s chest. The buck crashed to the ground at the end of its next leap and slid about 20 feet before coming to a halt. Though this third mature buck’s body seemed particularly large (its live weight turned out to be 295 pounds), its eight-point antlers were not exceptional. This was not a buck to pass up, however. As it stepped beneath some spruce boughs where its eyes were hidden from view, Tyler eased his rifle to his shoulder and took aim. It was then that his grandfather’s favorite spot to shoot at came to mind. 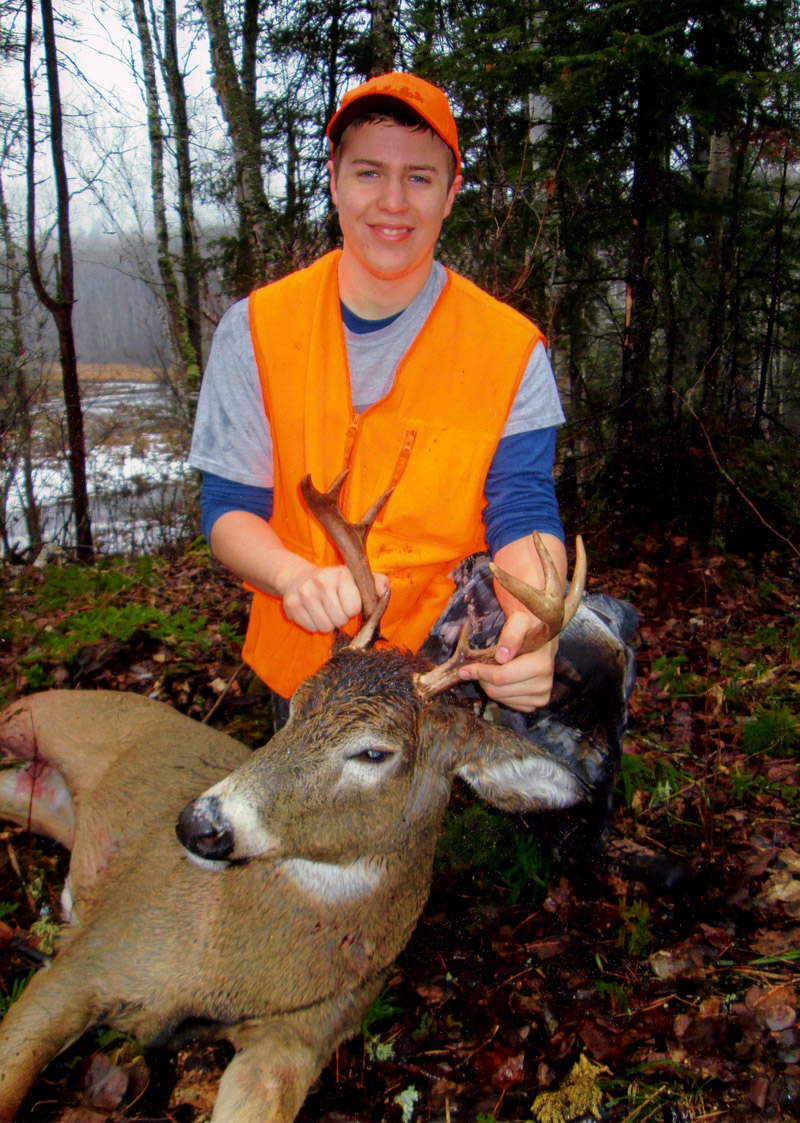 Tyler Nordberg with his 2013, 8-pointer.
[Note: the perspective in this photo disguises how massive this buck was — about 295 pounds live-weight.]

Our past deer hunting season was notably difficult, mostly because of our previous winter when snow was belly-deep to an adult whitetail from mid-December until the very end of the critical month of April. We lost 23% of our deer, mostly adult does, a consequence of starvation caused by being trapped too long by deep snow in wintering areas (yards) depleted of life-sustaining browse. Starvation not only reduced deer numbers but it greatly reduced the number of fawns given birth by surviving does in May. 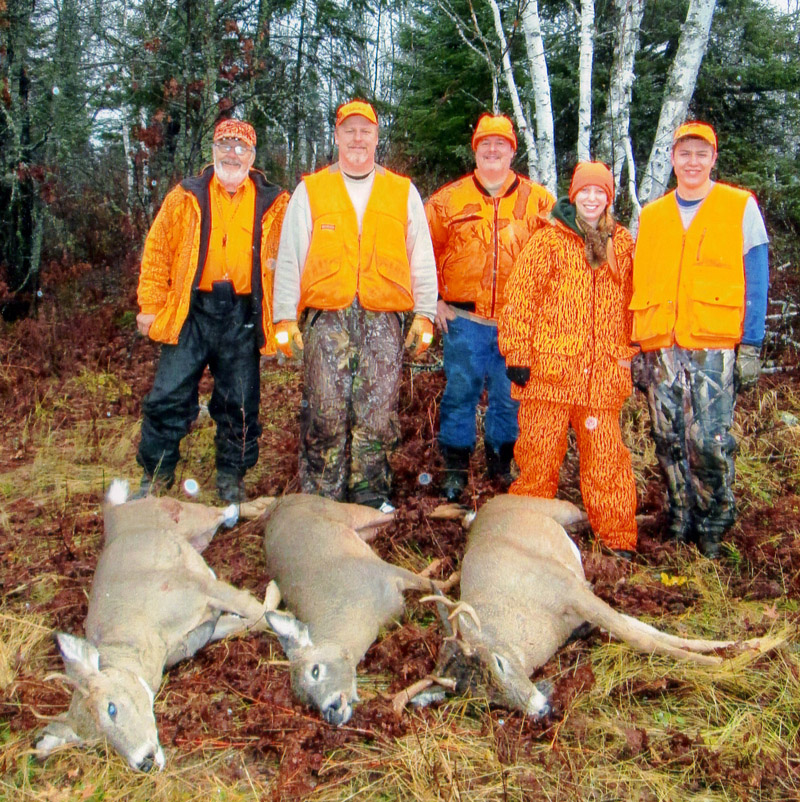 Starvation even obviously effected antler growth. The two yearlings Dave and I took were spike bucks. Throughout our previous 23 hunting seasons we only recalled seeing two or three spike bucks. All other yearling bucks were forkies or six-pointers. The six-point antlers on the yearling two of my sons passed up had a very weird configuration and the antlers on Tyler’s big buck were far from normal in size for such a large deer. Antlers had doubtless been stunted by poor physical condition at the time when new antlers normally begin growing, about May 1st.

Though our local wolves certainly played a part in losses of whitetails last winter, deep late snow apparently affected their physical condition as well, reflected by a lack of pups in November. Moreover, our local wolf pack, which typically comes together about November 8, was unusually small, totaling only four adults (normally numbering six to seven adults and one to three pups). The low number of deer in our hunting area last November, including only three fawns, was the probable reason our pack headed west on November 10 and were not seen or heard again throughout our deer hunting season. Other packs in surrounding wolf ranges were active (howling daily about first light and at sunset) east, south and southwest of our hunting area (numbers per pack unknown).

At noon on Sunday while John, Silver and I were busy dismantling deer camp, getting ready to head home, Dave’s van suddenly pulled up out front. Inside were Tyler and his father, Dave, both grinning, especially Dave.

“Tyler got another big one,” Dave announced, “another eight-pointer. You’ve got to come and take some kill-site pictures.”

“A little over two miles from here, near Ryan’s ladder stand. He shot it in the neck like you always do. He even field dressed it himself.”

“Congratulations,” I said, reaching in to shake Tyler’s hand. “Did it drop in its tracks?” I asked.

“Yup,” Tyler answered, “just like you said they always do.”

“No ruined shoulders on that buck,” I said. “I’m proud of you. You’ll end up with a lot more venison. While I change my boots and dig out my camera,” I continued, checking my watch, “you guys get the plastic toboggan, extra rope and bottles of water ready for dragging. We’d better get hoppin’ or it will be dark before we head home today.”

“Good for Tyler,” I was thinking as I headed into the tent. “He’s become an excellent woodsman and buck hunter. And now thanks to him, this hunt expected to be especially tough this year, turned out to be a pretty good one after all.”