[The following is the another of many older articles that will appear on my website. This is article was first published in Midwest Outdoors in March of 2013. Please share what you learn from these articles with your whitetail hunting friends.] 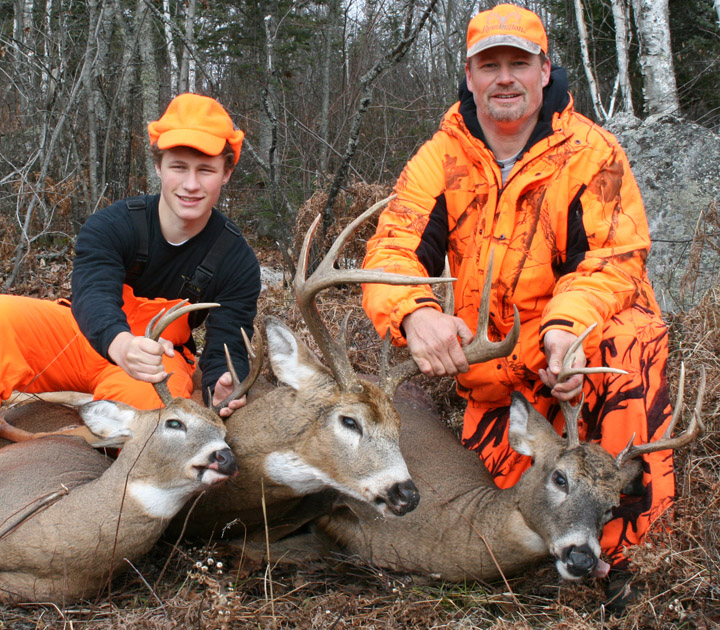 Two things happened on day three of our past Minnesota firearm deer hunting season that still cause my hunting partners and me to shake our heads. [Published March, 2013.]

Take the first one. In our state, any member of our group can take a deer for any other member of our group who has an unused tag for that deer (party hunting). It rarely happens in our camp. We generally take three to five mature bucks per year (our own restriction intended to insure we will have adequate numbers of wolf country deer to hunt each year). As it usually turns out, no takes more than one.

By the end of day two last season, my son Ken had taken two — the first a 3-1/3 year-old eight-pointer and the second a 5-1/2 year-old, trophy-class nine-pointer. [We have called that big buck both an 8-pointer, and a 9-pointer. That 9th point — on the front right — is small compared to the others and is sometimes forgotten in our conversations.] It was therefore his goal on the morning of day three to provide his teenage son, Ryan, with the best possible chance to take a buck of his own. After dropping him off at a blind atop a knoll overlooking a narrow strip of year-old clearcut, Ken decided to slowly hike a series of connecting deer trails that formed a half circle a half-mile east, north and west of Ryan, hoping to start a buck moving in his direction. It may have worked. Shortly after Ken returned to a portable tree stand he had set up overlooking the grassy opening we refer to as beaver valley meadow — located 200 yards east of where his son sat — Ryan glimpsed a buck sneaking through dense timber adjacent to the meadow. Before he could get it centered in his scope, however, it disappeared.

A few minutes later Ken spotted the same buck stepping into the tall grass of the meadow, 100 yards southwest of where he sat. Hoping it would eventually turn back into the woods toward Ryan, he settled back to merely watch it. At a point almost in line with the knoll where Ryan was sitting, the buck turned east toward Ken, heading across the meadow. Moving slowly, it passed directly beneath his stand platform, ending up downwind. Not unexpectedly, the buck caught Ken's scent 10 yards away and began snorting. it then dashed back across the meadow. Short of the dense timber on the opposite side, it turned to face Ken and began stomping the frozen ground with a fore hoof — an unsure but somewhat alarmed whitetail's attempt to illicit some kind of a response that would aid in positively identifying something potentially dangerous and/or to make clear where it was located.

After a few moments of this, the buck gave up and began walking north, away from both hunters. Ken then raised his 7-mm magnum and fired.

As Silver and I were approaching camp for lunch two hours later, I notice my blaze-orange toboggan and heavy-duty wagon were missing (used to haul deer to camp), prompting me to exclaim, "Someone's got a buck."

When I rolled down my window after driving to Ken and Dave's camp a half-mile north, Ryan stepped up and said, "Dad got another buck."

"How big?" I asked incredulously.

"An eight-pointer!" he answered, grinning. "Amazing, isn't it."

"I didn't want to shoot it," Ken explained later, "but it was getting away, and since we only had two deer hung behind camp, I figured I'd better take this one."

"Wow," I said, shaking Ken's hand. "Three eight-pointers or better in three days. That's amazing. None of us have ever done that. But this is getting out hand." Turning to Dave, I said, "Quick, hide Ken's rifle!"

"By the way," I added after everyone quit laughing, "we didn't have just two deer when you got this buck. Another deer, now covered with evergreen boughs is lying out in front of our Lonesome Pine blind waiting to be dragged in."

"It was kind of crazy," I began. "Shortly before seven I spotted a doe bounding directly toward me from the south side of the clearcut, finally stopping about 60 yards away. Then four more deer bounded toward me from the south, halting in a tight group around the first deer. Maybe a wolf spooked them. It was still a bit dark then, the sky being covered with dark clouds."

"At first I couldn't see if any of them had antlers. Using my scope, I finally spotted a fine set with eight points. Right then the five deer began moving west away from me, keeping close to one another. As soon as they clear some intervening brush, I took aim at the buck's neck (my favorite target on a whitetail) and fired. Down it went. Two of the deer then bounded straight south and the other two bounded west before turning south."

"Because whitetails sometimes ignore a gunshot, likely mistaking the sound for a crack of thunder, I waited a half hour before leaving my blind. About 20 yards from the downed deer I began to realize something was amiss. I saw no antlers. The doe had been hit in the chest. I rarely aim at the chest of a deer, especially at such short range. Chest shots almost always ruin lots of venison, one or both shoulders. I figure the doe had either jumped in front of the buck the moment I pulled the trigger or my bullet ricocheted off of an intervening branch or tree trunk. I spent nearly an hour searching for a sign of a hit on the buck but found nothing."

After discovering what I had done, I wasn't feeling good about it. I had just significantly reduced the ability of the whitetails of our hunting area to recover from year 'round hunting by gray wolves. Three or four fawns born in our area are killed by wolves by November 1st each year, and since 1990 our deer population has never exceeded 8–11 per square mile, about half of what this region supported a few years before wolves became protected by the Endangered Species Act (ironically, wolves three miles north, in Canada, were never considered endangered).

We've long realized if we regularly took does under these circumstances, we'd soon find it necessary to look for a new hunting area. Moreover, because we have not harmed our does for more than two decades, some have become tame, not uncommonly passing or feeding within ten yards downwind of where we are sitting. We therefore never hunt our does. Besides, they're fun to watch and they are great decoys for bucks. We have taken as many as three dominant bucks — two now on the wall — that accompanied one of our does during the past hunting seasons. [Actually, quite a few more than that.]

[Every year, Doc applies for an antlerless permit. He never uses it. Every year, he always reminds us, "Getting one of these limited doe permits saves the life of another doe." We've often commented, it is also nice to have an antlerless permit in camp, just in case a doe gets shot by accident. This is the first time I can remember it actually happened in our camp.]

Upon skinning the doe, we discovered it had been hit in the chest by five separate bullet fragments, meaning the bullet had indeed hit a branch or tree trunk before hitting the deer, also likely causing the bullet to change course, missing the buck.