How to Cook a Black Bear

This is one of thousands of articles authored by Dr. Ken Nordberg and first published in outdoor magazines. This updated article was first printed in Bear Hunting Magazine, the July/August 2002 edition. The original 2002 article is largely taken from Dr. Ken Nordberg's book, Do-It-Yourself Black Bear Baiting and Hunting -- 2nd Edition -- which is currently out-of-print. 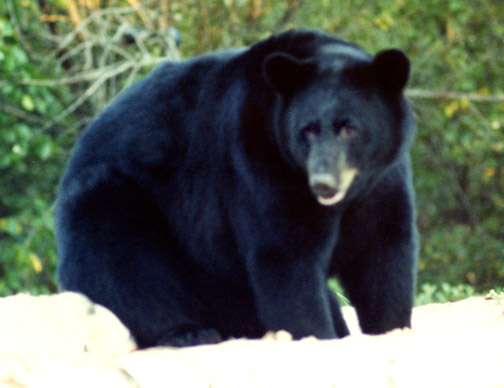 Black bear meat is superb. I also love venison, but I swear meat from a deep-woods (non-dump) black bear is at least ten-times better than venison; more tasty, more tender and more juicy. Even our cat, Misty, loved bear meat. If you gave here some venison, she would take one sniff and stomp away wagging her tail with disgust. One whiff of bear meat, however, made her meow with excitement and purr with pleasure when someone finally gave her a piece. I also love bear meat fro what it does to the eyebrows of people who act as if you are trying to poison them when you serve wild game. With the first reluctant taste, their eyebrows raise as high as eyebrows can go. The most dedicated wild meat haters are instantly flabbergasted.

"Yaaah," they grudgingly admit, "maybe you're right. I just can't believe it. It doesn't taste even a bit gamy."

Even veteran hunters are surprised by their first taste of bear meat. A long-time deer hunter who attended my Buck and Bear Hunting School last year, recently wrote me a letter, saying, "Being a true meat hunter (only hunting what I know will be consumed), I wish I had been harvesting bears before now. It (bear meat) truly is as good as or better than beef."

One of the delightful things about cooking softy-textured bear meat is; it does not dry out as easily as venison and many other wild meats. That is doubtless due to the fact that bears carry a lot of fat. Their meat is therefore somewhat marbled with fat, though not to the degree expensive cuts of beef are marbled with fat. This, of course, means bear meat is healthier than beef as it contains less cholesterol.

Another delightful thing about bear meat is the flavor of its fat. It is sweet and light, unlike strong-flavored venison fat, and the fat of many other wild game animals, which contributes to so-called "gaminess." Bear fat heightens the flavor of the meat, like the fat of beef, pork, chicken or turkey. Little wonder early Americans considered lard rendered from black bear fat to be the very finest for making pastries.

Unfortunately, black bear meat has one negative aspect: like hogs, black bears can be hosts of the organism that causes the disease, trichinosis. Like pork, black bear meat must not be served pink. It must be cooked until medium to well-done.

I will gladly settle for bear steaks fried in a sizzling, cast-iron skillet, nothing beats bear steaks broiled over a hot bed of charcoal. Lay them on the grill close to the heat, brown them on one side and then turn them over. When red juices begin oozing from the top, the steaks are medium-rare. It does not take long after that before they will become medium. When oozing juices first become amber and clear, they are usually medium. I usually cut into one with a sharp knife to make sure. Do not allow bear steaks to over cook. Well-done is too done. When medium, they will be tender and juicy. Moments before serving, I sprinkle on a little salt and coarsely ground pepper. If from a small-to-medium-sized bear, you will probably be able to cut your steaks with a butter knife.

It is impossible to make a bear stew that is not good. In fact, any recipe you prefer for making beef stew is guaranteed to make a wonderful bear stew. You will probably wonder why your beef stew never tasted as good.

The following recipe, personally developed over a period of 30 years, will lead to unabashed groans of delight. Being often requested Sunday meal whenever my kids and their families know I have bear meat in the freezer, I am usually obliged to make a large batch at a time. The following recipe will feed 14 hungry adults.

Start by melting the shortening or heating the oil in a large, cast-iron or heavy aluminum roaster placed on a stove top burner set on high. Add the bear stew meat as soon as the shortening is melted and stir briefly with a large wooden spoon. Immediately add two onions, finely sliced. With the roaster uncovered, cook the meat on high, stirring occasionally until it is all darkly browned. Turn the heat down to medium and continue cooking, stirring occasionally, until the liquid at the bottom of the roaster begins to turn medium-to-dark brown. Then, using tongs, remove the meat from the roaster, placing it in a bowl to one side.

Turn the burner back on high to bring the liquid in the bottom of the roaster to a vigorous boil. Scraping the bottom of the roaster frequently, boil this liquid (turn the heat down a bit if needed) until the liquid is reduce to about 1/4 inch, thick and very dark (not black, do not burn it). Add 1 tsp. catsup, 1 tsp. Western Salad Dressing and 1 tsp. flour, stirring vigorously until dark brown. Move the roaster from the burner and allow it to cool a few minutes. Now add 1-1/2 cups of water and place the roaster back on the burner, on high again. Thoroughly scrape the bottom of the roaster as the water comes to a boil. As soon as all of the scrapings have become uniformly incorporated into the boiling water, add all of the prepared vegetables; onions, potatoes, carrots and celery. With the burner on high, liquid boiling vigorously, occasionally stir the vegetables until all are uniformly browned on the outside. This will take about 20 minutes.

Now return the meat back into the roaster and stir into the vegetables. Add enough water to raise the level of the liquid up to about one inch from the top of the meat and vegetables, burner on high.

Add one cup of flour to a pint jar, fill the jar almost to the top with cold water. Stir briefly with a fork, adding more water if necessary. Cap tightly and shake the jar vigorously for 15 seconds. Set the jar aside (allowing unmixed lumps of flour to become thoroughly saturated with water).

As soon as the water in the roaster begins to boil, shake the flour/water mixture again and then pour it slowly into the meat and vegetables while gently stirring. Continue stirring until the liquid comes to a boil and becomes a thick gravy. If not thick enough, add more flour and water until the desired consistency is achieved. Now turn off the burner.

Add all remaining ingredients, stirring them gently into the stew. Do not worry about whether you have enough salt in the stew at this point. You can add more later. Place the roaster in your 300 degree oven, uncovered. Cook 6-8 hours, adding water when necessary, stirring in very gently. The uppermost meat and vegetables should protrude about 1/2 inch from the gravy at serving time. If you cook your stew in the oven overnight, turn the oven down to 250 degrees and partially cover the roaster with foil. Turn the oven back up to 300 degrees in the morning, adding 2-3 hours cooking time. After that, cover the roaster and keep it in the oven on warm until company arrives (no more stirring).

Fresh-baked honey-wheat bread (made from store-bought, frozen loves) goes wonderfully with this stew; also fresh apple pie. The aromas from your kitchen will lure people directly to the table as they come in the front door.

A bear roast cooked slow (300 degrees) in a heavy, covered roaster in the oven until beginning to fall apart (4-6 hours) is a delicious addition to any meal. I like to start by browning a thawed roast quickly on both sides in a roaster over a stove top burner. Then all I add is a little salt, pepper and sliced onion. I sometimes add barbecue sauce about three hours before serving.

Whatever recipe you use that requires ground beef, ground bear meat will make it better, bear spaghetti and bear chili being among the best.

My wife prefers burgers made with ground bear meat over all others. Here is how I make them.

Form ground bear into 1/2-pound patties about 3/4-inch thick. Fry or broil, in the oven or over charcoal, until medium-done, turning once. After turning (once side browned), spoon over the top a half-and-half mixture of barbecue sauce and Western Salad Dressing (adding Western Dressing to meat might sound crazy, but when cooked it becomes a wonderful wild game sauce). Then add a large, thin slice of onion (raw or partially cooked). When the meat is done, place it between slices of toasted wheat bread or in a toasted sesame seed bun.

After trying the above recipes, I know your bear meat is not going to last long. You will probably even start telling friends and relatives begging for bear meat that you have no more when your supply is only half-gone. After you do run out, you will soon begin to crave bear meat. Before you know it you will be asking someone, "Hey, when's the deadline for getting a bear hunting permit application sent in?" 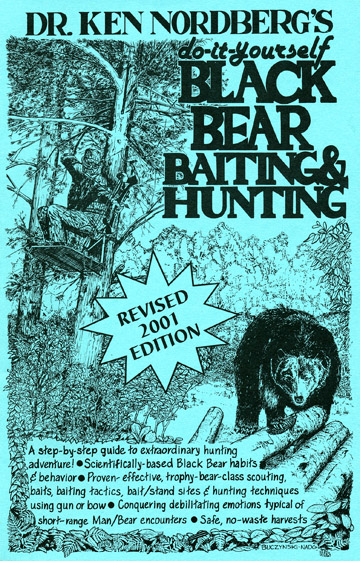 Unfortunately -- as of 2013 --
Dr. Ken Nordberg's
do-it-yourself Black Bear Baiting & Hunting
is out of print.
Hopefully, a revised edition will be printed.
Or, possibly, an eBook will be made.

Through the year 2005, Doc gave a spring class on whitetail deer and black bear hunting.

If you would like to order his Bear Hunting School DVDs, then you can find more information here.

Please check back to Doc's web site --
www.drnordbergondeerhunting.com
-- to check for updated information on this book, and Doc's other hunting products.