[The following is the another of many older articles that will appear on my website. This is article was first published in Midwest Outdoors in February of 2006. Please share what you learn from these articles with your whitetail hunting friends.] 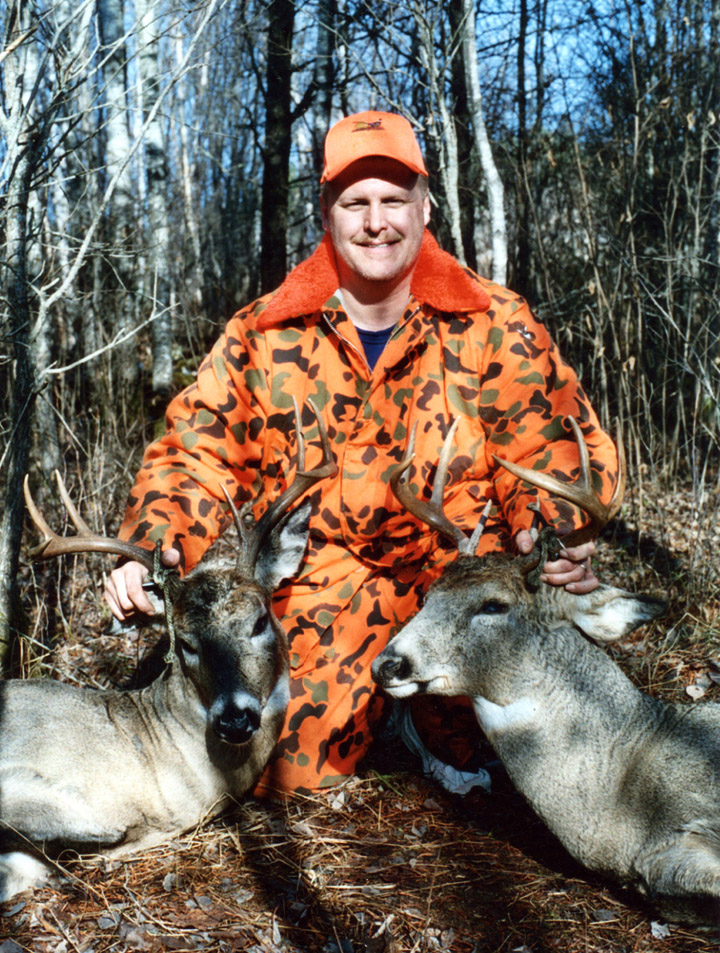 “Right after it became light enough to see, a buck grunted several times in those pines over there on my right, but I couldn't see it,” my grandson, Matt, excitedly said.

It was 11:00 a.m. on the second day of our 2005 hunt. This was Matt's second year (fourth day, actually) of whitetail hunting, this time afield severely limited by demands of earning a college degree in electrical engineering. Yet unsure he could find his way via my unmarked trails, I had hiked to Matt's ground level blind to lead him back to camp for lunch.

“Because you said does and fawns rarely grunt,” Matt explained, “I figured it was a buck. Later I spotted a deer sneaking through the pines over there on the other side of this feeding area (about 100 yards away). The deer looked big, but I could only see parts of it and I couldn't see if it had antlers so I didn't shoot. After that, I didn't see anything except for a lot of red squirrels.”

“You did the right thing,” I assured him. “On opening morning, John (my oldest son) spotted a buck (he glimpsed antlers) sneaking through those same pines, but, because it never stepped into an opening, he didn't fire at it either.”

Sure, legally it wouldn't have mattered what kind of a deer Matt or John saw. Either could have fired at it. Our licenses entitled us to take one deer of either sex. We Nordbergs, however, have long made it a rule to adult bucks only, mostly because since 1990 the deer population in our wolf-infested hunting area has ranged from between eight to 11 per square mile, far below the 22 per square mile it once supported. If we harvested does, we'd soon be searching for another area to hunt. Besides, we enjoy the challenge of buck hunting and are sufficiently successful at it, generally tagging three to four adult bucks per hunting season. This provides each of us with all the venison we care to eat in a year. Moreover, being skilled enough to harvest this number of adult bucks, our hunting is rewarding even for those of us who don't succeed in taking a buck. In addition to at least spotting a few big bucks each season, we all enjoy watching a good number of other unsuspecting deer at short range — adult does and yearlings and fawns of both sexes.

“Someone shot twice northwest of here about 9:30,” Matt added.

“That was Dave,” I replied. “I thought his shots came from our west pond trail, where he and Ken spotted that buck yesterday morning. Curious, I headed down there about 10:30. As I approached the site where I thought I'd find Dave, I suddenly spotted moving antlers about 100 yards northwest. I could barely see the deer beneath them. The buck was moving fast through deep grass on the far side of one of the beaver ponds. It disappeared into dense timber without offering a shot. Dave showed up a few minutes later. You'll hear all about what happened to him when we get back to camp for lunch. Right now, we'd better get a move on.”

The buck seen by John and Matt had not only proved to be characteristically elusive, but it would soon prove to be lucky as well. My old hunting partner, Silver Harychi, came to camp Monday afternoon. During our previous hunting season, he had taken an enormous 10-pointer, and he was thus especially eager to join our gang again. 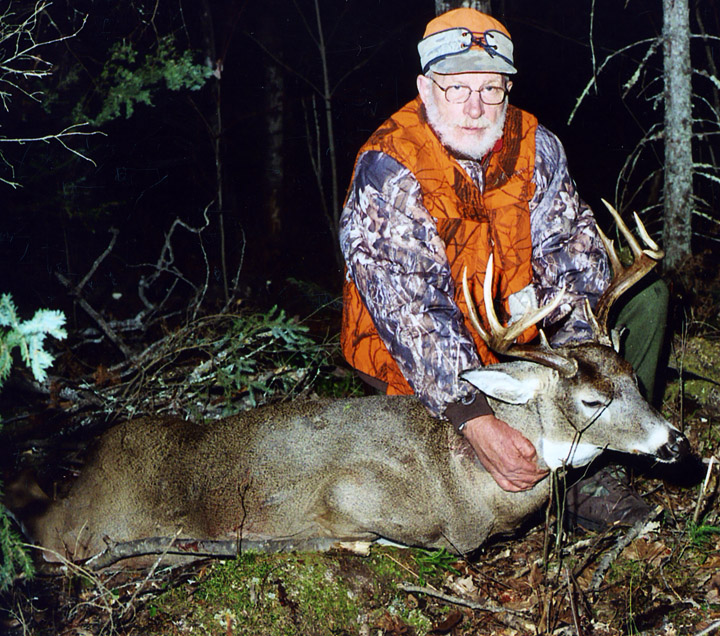 After leading him to our ground blind overlooking the feeding area, I headed to a favorite stand site a quarter-mile downhill. Forty-five minutes later I heard what seemed like a horrendous explosion uphill. “Silver got the buck!” I concluded. “I'd better get up there and give him a hand.”

Figuring the buck was probably spotted on that pine-covered ridge across the feeding area, I headed directly there. Silver caught up to me a few minutes later.

“Boy,” Silver said, “that sure had the blind pegged. Every few steps it would stop behind a tree and stare directly at it. It sure knew something was there. I was standing about 10 yards to the left behind the trunk of a big pine. I don't think it saw me. When it got to this wider opening, it began moving fast. I had it good in my scope and took a poke at it. At the shot it seemed to stumble, but then it took off bounding down the other side of this ridge. It was a nice 10-pointer.”

Over the next hour, Silver and I searched the entire area, tracing ever-widening circles out to 200 yards, but nowhere did we find evidence of a hit — no hair, no blood, nothing. We finally concluded that buck would be around to challenge one or more of us again next season.

That's buck hunting for you, success or failure not uncommonly a matter of a few minutes, or a few inches. Actually, adult bucks are often very near most deer hunters, but many fail to realize it until it's too late, if at all … or almost too late, as in Dave's case when he took his second buck of the season.

“I didn't hear or see that buck (an eight-pointer with an unusually wide and dark rack) until it was only 10 yards away. It couldn't have smelled me, but it must have heard me because it began to run away, heading north along my stand site approach trail. When it hit our Birch Mountain cruise trail 50 yards away, it turned left. At that point I finally got it centered in my scope and shot. Surprisingly, it didn't go down. Instead, raced west and then turn south, running back toward me. It suddenly halted in a small opening 50 yards away. It probably would have fallen there (the first shot was fatal) but I decided to take no chances. Aiming for its heart, I shot again. This time it dropped in its tracks. And,“ David added with a grin, “I managed to beat the odds imposed by our second buck rule.”

Whereas we Nordbergs each prefer to take our own bucks, we do allow members of our gang to take more than one (party hunting is legal in Minnesota) under one condition: the second buck must be larger than the first one. Because we all generally begin each season intending to take a 3-1/2 year-old or older (larger) and because our deer population is low, the odds of accomplishing such a feat are far from favorable. This rule, however, at least gives a hunter incentive to continue hunting.

[Dr. Nordberg is the author of eleven best-selling books — nine are the Whitetail Hunter's Almanac series, 1st through 9th Edition — two are his bear books — his latest bear book is destined to be his twelfth best-seller. Each Almanac covers one or more different subjects, including both new and improved, well-proven hunting methods. All of Dr. Nordberg's books are based on, as of 2014, more than four decades of scientific, hunting-related studies of wild whitetails over most of North America. Dr. Nordberg is famous for creating the Modern Era of Deer Hunting: he was the first to build, scientifically research, and use natural tree stands in the 1970's. Then, because of he evangelized the use of natural and commercial tree stands — in his published magazine articles and books, and in person at hunting show seminars in the 1980's and 1990's — this greatly sped up the now widespread adoption of tree stands. His early published books and articles not only taught us how to build natural tree stands — but also the strategies for how to properly hunt from natural and commercial tree stands. Some of his latest hunting strategies teach hunters how to compensate for the decreasing effectiveness of tree stands. Critically, Doc's biological research and publications introduced and taught whitetail deer hunters about the Phases of the Rut — a bedrock concept for the Modern Era of Deer Hunting. Dr. Nordberg is also famous and respected for his ground-breaking biological research relating the size of deer sign (tracks, droppings, beds, antler rubs & ground scrapes) to the class and size of deer. Dr. Nordberg's numerous, very successful whitetail hunting strategies are legendary. Most experienced deer hunters know about, and use, his highly successful drive technique called, “The Gentle Nudge.” His original biological research on hunting scents greatly influenced how to use, and how not use scents and related products. What Dr. Nordberg has been teaching deer hunters for the last 40+ years will be just as relevant and important for deer hunting 100 years from now as it is now. His bear hunting book, Do-It-Yourself Black Bear Baiting & Hunting, is also based on studies of wild animals, and has been the black bear hunter's bible since it was first published in 1989. Doc revised his bear book — its Second Edition — in 2001. Dr. Nordberg released a greatly revised Third Edition of his bear book in September of 2014. This latest version is a 360 page ebook that utilizes the latest technologies in book publishing, providing: zoomable color photos, interactive photos, internal hyper links, external hyper links to the internet, variable text size, electronic bookmarks, electronic notes, flashcards, an extensive hyper linked glossary and integrated video that can be watched on large screen HD televisions. This ebook is not simply text and photos, its new HD videos show the black bear hunter step-by-step instructions on how to create the perfect black bear stand/bait site. In essence, Doc introduced bear hunters to an entirely new way of hunting black bears — hunting black bears from tree stands over a bait pit — because: he started and evangelized the use of natural tree stand and commercial tree stands in the 1970's and 1980's; he invented and then introduced the bait crib to black bear hunters in 1989; and then he did the same with 6-foot covering logs and positioning bait in 2001. More than that, Doc continues to teach black bear hunters the critical strategies and details — such as, the rule of six and conditioning — for greatly improving the odds of taking trophy-class black bears.]