A Great Opener After All 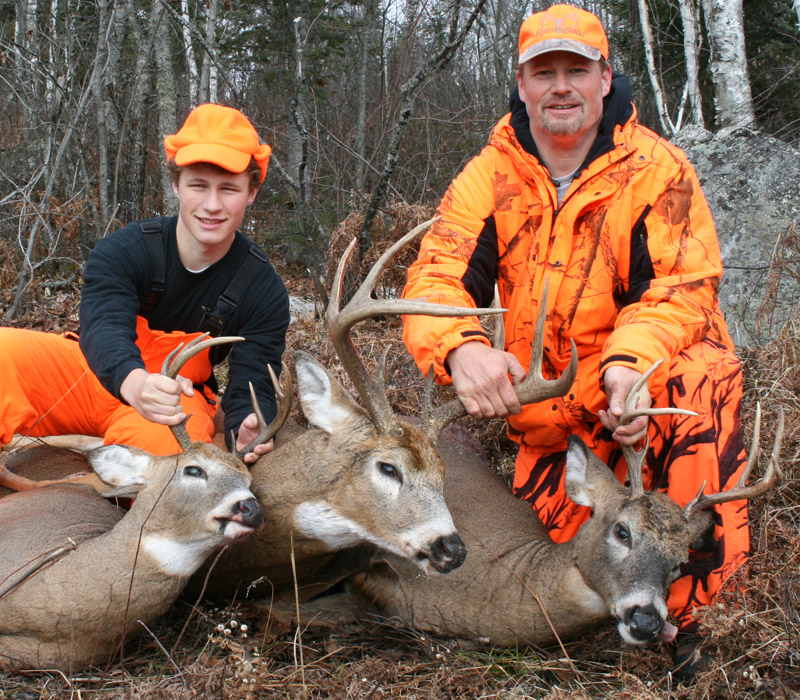 Ken with buck number one from an amazing string of good decisions.
(While Ken took three 8-pointers in 2012, this story is about medium-sized eight-pointer on the right.)

Any non-hunter passing through the region where we hunted whitetails last November 3, opening day, would not have realized a firearm hunting season was in progress. It was that quiet. Between first light and noon I only heard two distant shots and only three others late in the day.

One probable reason was our east wind. East winds are relatively rare during our November deer hunting seasons and when they occur, they're usually brief. We therefore hadn't planned for hunting in an east wind and I don't think any other hunter in our region planned for it either. The trouble was, all of our most promising stand sites — both ground blinds, and tree stands — were located where they could only be approached from downwind or crosswind while the wind blew from one of our customary opening weekend directions, south or west. There was a lot of moaning after the alarm clock rang at 4 a.m. in our camp that morning, then realizing we were stuck with having to make do with lesser stand sites or sites where no pre-season scouting or preparations had be done at all (having learned the hard way, we never approach stand sites from upwind).

Being nonetheless determined to hunt a relatively small clearcut shaped like a three-bladed propeller west of camp, I decide to make a wide detour to its downwind side, following a trail I used many years ago to haul bait and hunt black bears. I'd have to start out heading downwind but a half-mile west I'd swing north, moving crosswind to the western tip of one portion of the clearcut. Soon after I started out, however — flashlight in hand — the trail disappeared into an endless tangle of alders and downed trees. It took 45 minutes to reach the spot where the trail turned north past an old beaver pond. (At moments like this, we wished we had cleaned up the trail during fall scouting.)

The heavily clouded sky was beginning to brighten when I finally found myself close to the clearcut; the treeless space above it now visible through the branches of the dark trees ahead. At that point I decided it would be prudent to sit down on my stool and wait until it was light enough to find a suitable stand site without using a flashlight and without making identifying sounds; thus avoiding alarming any deer that might be feeding within sight in the clearcut.

Fifteen minutes later I stood up, intending to sneak towards a dense clump of young spruce trees — a great looking natural blind at the western tip of the opening. Right then an unseen whitetail began snorting repeatedly northeast of where I stood. Easing back to my stool and freezing didn't help matters. The deer continued to snort at least once every minute or so for about ten minutes.

After it finally quit, I crept to the spruces, hoping my odds of taking a buck that morning hadn't been totally ruined. Ten minutes after sitting down where I could finally see out into a third of the clearcut, I heard two soft grunts. The deer that made the grunts — a buck I assumed — was hidden by a line of evergreens that screened the portion of the clearcut that extended north. Shaking my head, I thought, “If the wind had been blowing from any other direction, right now I'd be sitting in a blind where that buck would be fully visible.”

The rest of the morning was a bust. I heard nothing more and saw no deer.

Fresh tracks, droppings and urine inspected in the north end of that clearcut shortly before noon revealed the grunter had indeed been a mature buck and its tracks were mixed with those of a mature doe and a fawn. The doe was the likely snorter and it was definitely in heat — its urine having drops of blood in it. Whitetail breeding had started right on schedule (normally beginning between the third and fifth of November in northern Minnesota).

While eating a cold lunch in camp that day, almost everyone reported seeing one or more unsuspecting deer. Only one had been a buck, however, a mere spike that was passed up. This many sightings weren't bad, actually, but the big bucks we were holding out for had been somewhere else. We couldn't help but imagine they had passed within easy shooting range of the stand sites we had long planned to use opening morning.

At lunch, my son Ken was taking a bit of kidding. Dave started it by saying, “Just when I was beginning to think skill had something to do with your amazing hunting success, here it is noon on opening day and you still haven't taken a buck.”

“Maybe his luck has finally run out,” John suggested. “That kind of luck can't last forever.”

“Well,” Ken responded after awhile, taking it all in stride, “I've got some good ideas for hunting in this wind. This afternoon I think I'll put Ryan (his son) in that stand overlooking the beaver valley meadow where we've seen so many bucks over the years and I think I'll try that area where Dad got his first buck in this area. There were lots of droppings there when we scouted.”

After studying our hunting area map, I decided to give our newly name Lonesome Pine Blind a try. The part of another clearcut out in front of it also had lots of buck-sized tracks and droppings when we scouted and it could be approached through dense forest cover from crosswind.

As the clouded sky began to darken that evening, I decided to head back to camp early. I personally hadn't seen a deer all day and I was beginning to feel a little bit discouraged. As I stood up and swung my folding stool to my back, I heard three well-spaced shots far to the north, the first heard all afternoon. Opening day had not been like we had imagined it would be. More tracks and droppings than we had ever seen had been found almost everywhere while scouting weeks earlier, leading us to believe our year-old clearcuts were finally attracting additional deer to our hunting area. But something was wrong. Maybe our wolves, now four times more numerous than in 1990, were driving deer out of our hunting area, or maybe poaching was at fault. Fifty-some shots from a rapid-fire weapon near the clearcut along the main road about 8 p.m., the night before the opener strongly hinted poaching was not unusual here. “Whatever the reason,” I finally concluded, “It appears we are in for another tough hunting season like last year.”

My hunting partner Silver and I reached camp just after dark that evening, John and his son Jimmy showed up twenty minutes later, at 7:30 p.m., with a hot sumptuous dinner ready to serve, we began to wonder what was keeping the rest of the gang. At 8 p.m., a motor vehicle approached from the end of the forestry trail a half-mile north, sounding as if pulling a plastic toboggan.

“Someone got a buck!” I blurted, grabbing my flashlight and rushing outside.

Five flashlight beams were soon trained on an eight-pointer lace to a toboggan behind Dave's vehicle.

“Ken, of course,” Dave answered, “He, Ryan and Tyler will be here in a few minutes.”

Soon the whole gang was standing around that buck and Ken began relating his latest hunting tale. “I was sitting on my stool about fifty yards from that outcropping where you got your first buck here, Dad,” he began. “Nothing happened until it was time to leave. The moment I stood up I heard twigs snap behind me. As I slowly turned my head, I spotted a doe and a fawn standing next to an opening about 80 yards away. Hoping a buck was with them, I turned slowly and began scanning the woods behind them. The doe then decided to run across the opening and the fawn quickly followed. Soon after that I spotted this buck. Appearing to be a decent eight-pointer, as it raced across the opening toward the other two deer, I raised my rifle and fired but missed. It was moving through fairly thick cover when I finally got my scope on it again and fired again. This time it went down. As I approached it, I discovered it had been hit in the spine a little ahead of its hind quarters so I had to fire a finishing shot.”

“While we were field dressing Dad's buck,” Ken's son Ryan excitedly added, “two wolves were watching us about 100 yards away.”

“Here's something extra for dinner tonight,” Ken then said, grinning, handing me a plastic bag containing the hear of the buck (a Nordberg deer camp tradition).

“Congratulations,” I said, vigorously shaking Ken's hand. “You did it again, making our camp a happy camp on opening day like you've done so many times before. It's amazing. This certainly gets us all back in a positive mood. I think this is only the beginning.”

Little did I realize how our hunt would play out. As those of you who read my article in the January edition of MidWest Outdoors know, Ken took a monster buck (a probable addition to the Boone and Crockett Record Book) the following morning, and that's not the end of the story.