[The following is the another of many older articles that will appear on my website. This is article was first published in Midwest Outdoors in August of 2015. Please share what you learn from these articles with your whitetail hunting friends.] 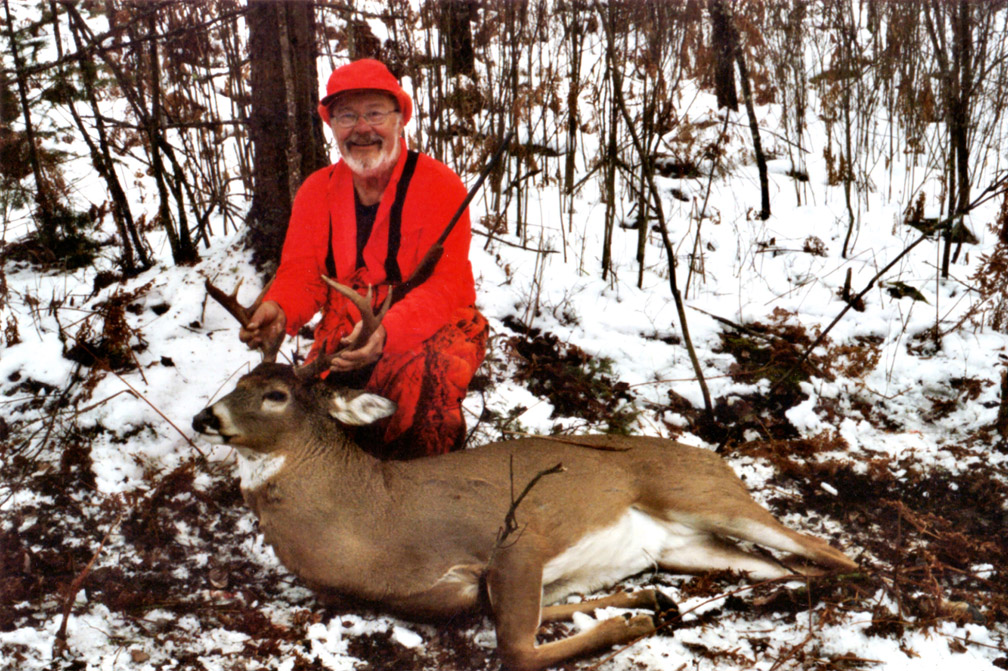 For my sons, daughters, grandsons and granddaughters, the will and ability to hike unerringly to and from distant stand sites in darkness evolved from many years of being rewarded for doing it: seeing and taking mature, unsuspecting bucks much more regularly than when we limited our hiking to daylight hours only. Take the morning I recently decided to hunt at what I considered to be a “very promising” buck stand site that could not be approached via the shorter, originally planned route because the wind direction was wrong, blowing from the southwest. To approach that stand site from downwind before first light (a much-proven buck hunting rule in my camp), I’d have to take a two-mile detour in total darkness via a number of unmarked and unprepared connecting deer trails that would finally lead me to a trail that would allow me to approach the site from 200 yards downwind.

It was 5:30 AM when I arrived at the spot where I planned to turn straight east from an old logging trail a mile north of camp and about another mile northwest of where I planned to sit. The stand site I had in mind was a clump of four-foot-tall oak saplings beneath a scrubby red oak on a slope overlooking a deer trail I could not get out of my mind, discovered while scouting three weeks earlier. Coursing between a large hill (bedding area) west of that oak tree and a beaver pond east of it (watering spot), this well-worn deer trail was full of fresh and old tracks and droppings made by two different mature bucks. It was also a scrape route in late October.

The first deer path I planned to use to get there crossed a saddle near the south end of a high rocky (Canadian shield) ridge and then dipped down through a low browse area much visited by whitetails during past hunting seasons (currently devoid of fresh deer tracks). From there, I climbed to the north end of a white granite slab of rock more than a quarter-mile mile long. My scrub oak stand site was at the southern end of it, now upwind. Turning south, quartering into the wind, I followed a familiar, moss-covered deer trail through scattered spruces to the section of the ridge that was treeless. When I halted to decide whether I should take the easy route across that opening or head southeast to a deer trail that curved through dense brush and tall quaking aspens (locally known as popples) around the southeastern perimeter of this gigantic outcropping, a doe jumped from its bed 20 yards to my right, trotted (not in a great hurry) past me (made barely visible by my cap light and the narrow glow beginning to widen along the eastern horizon) and disappeared into a stand of young aspens on my left.

Deer obviously being in the vicinity, I decided It would be prudent to use the trail coursing through the tall popples where it would be difficult for nearby whitetails to see me passing or approaching. Shortly before finding that trail, however, I came across a patch of snow about 25 feet in diameter where two mature bucks had obviously battled a short time earlier. Now anxious to get to my stand site as soon as possible, I took off at a steady pace into the wind along that woods trail (illuminated by my green-bulb cap light), keeping my head pointed straight ahead until about 100 feet east of where I planned to sit (imitating the way our gray wolves pass deer without alarming them). There I halted again because in the freshly fallen snow before me was another well-trampled patch of snow where two bucks had battled a very short time earlier. The odor of buck musk was still strong there.

About 20 feet to the right of this site I noticed a splash of black dirt scattered over the new-fallen snow. Upon taking a few steps nearer, it became obvious it was a very recently renewed ground scrape. The scrape was more than four feet in diameter and an overhanging bough of an adjacent black spruce was mangled, pieces of it scattered across the scrape.  Surely this scrape had been made by a dominant buck (not a common find while breeding is in progress) determined to make a scrape impressive enough to warn any other bucks in the vicinity to keep away from this portion of its breeding area.

With knees now trembling a bit, knowing one or two mature bucks were near, maybe very near, I backed cautiously away downwind, soon spotting what appeared to be an appropriate spot to place my backpacked stool. After tiptoeing through a dense patch of four-foot-tall mountain maples, I sat down on my stool with my back against the rough bark of a two-foot-wide trunk of a popple and pulled down my camo headnet.

Thirty-some minutes later, the sky now fully light, I was suddenly astonished to see the head of an eight-point buck with wide and heavy antlers intently rubbing scalp musk on that ravaged spruce bough over the scrape 25 yards away. Upon slowly raising my rifle, I centering my scope on the buck’s neck and squeezed my trigger. After waiting about five minutes, hearing or seeing nothing more during that time, I anxiously arose and tiptoed through the mountain maples toward the spot where I last saw the deer. There it was: a beautiful buck weighing nearly 300 pounds lying motionless across its scrape.

After experiencing this kind of an adventure a few times, a not uncommon reward for becoming  “a real woodsman (see Part-I in the July Edition of Midwest Outdoors),” you too will little hesitate to hike great distances on foot in total darkness to get to special stand sites, taking extra care along the way to avoid being seen, heard or smelled by nearby deer. Believe me, it’s all very worth the effort.