[The following is the another of many older articles that will appear on my website. This is article was first published in Midwest Outdoors in February of 2015. Please share what you learn from these articles with your whitetail hunting friends.] 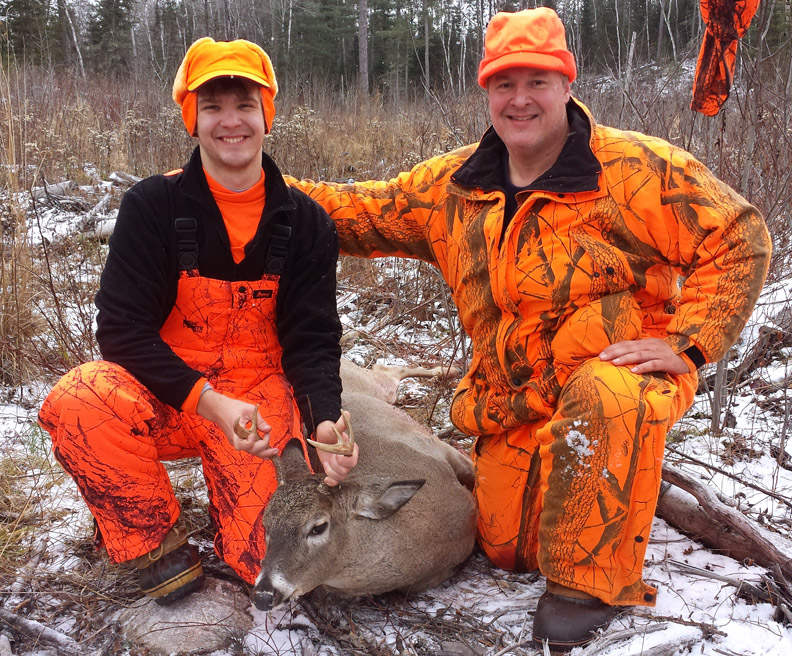 The 7-pointer came up the trail behind him and silently walked past on his right, only seven feet away. As you might imagine, this first sighting of a whitetail during the second morning of this young hunter’s first hunt was more than a bit unnerving. His reaction was instantaneous. He abruptly cocked his 30-30, raised it from his lap and swung the bore toward the deer. The buck’s reaction was similar. Upon recognizing its unexpected peril, it bolted straight ahead with all possible speed, heading across a 100-yard-wide meadow covered with deep, straw-colored grass (a distance a bounding buck can cover in five seconds). The young hunter therein discovered it is nearly impossible to keep a rapidly fleeing whitetail making eight-foot-high leaps centered in a scope. Hoping for the best, he fired. The buck’s progress was unchanged. Before the hunter could lever another round into his rifle’s chamber, the buck disappeared into dense spruces on the opposite side of the meadow. Subsequent tracking by a much-experienced uncle revealed dreaded news: he had missed. This was my grandson Jimmy’s introduction to whitetail hunting.

During the following year, I’m sure Jimmy often thought about that shocking moment when he discovered a buck passing only seven feet away. Back in camp, all the veteran hunters had given him plenty of advice.

His father had said, others agreeing, “When you are hunting properly, such meetings with whitetails are common. All of a sudden, there one will be, so close you can hardly believe it.”

“You should have waited to move,” his grandfather had advised. “The next time you discover one up close like that, rather than grab your rifle and prepare to fire, freeze. Don’t move anything until you are certain that deer can’t see you move, its head hidden by intervening cover or turned straight away. If you had waited to move until that buck was well past you, quartering away not realizing it was in danger while crossing that meadow, you would have had an easy shot.”

While scouting two weeks before the next hunting season began, Jimmy’s father, John, Jimmy and I discovered just what we were looking for: a natural blind for Jimmy with great promise for taking a buck. The blind was a pile of storm-toppled evergreens on a knoll overlooking the narrow end of a two-year-old clear-cut. Out in front of the knoll we showed Jimmy fresh and old tracks made by a mature doe accompanied by a fawn and some larger tracks made by a 3-1/2 to 4-1/2 year-old buck. Obviously, these deer often fed on the lush grasses in this clear-cut. Among the grasses were abundant red osiers (red bark dogwoods) and red suckers growing from sugar maple stumps — favorite foods (browse) of our northern whitetails beginning in early November. Unfortunately, Jimmy saw no deer there during the day and a half he could be away from school that year. He was not discouraged, however. He knew buck hunting often required more time, and even then, the most successful of hunters in camp occasionally failed to take a buck.

When John and I returned to Jimmy’s stand while scouting last October, the site seemed as promising as ever. Though deer numbers were down because of our two previous severe winters, it appeared the same doe, again accompanied by a fawn, and a buck, likely a 2-1/2 year-old, often fed within 50 yards of that knoll.

Opening weekend of our 2014 firearm deer hunting season (in the far-north region where we hunt) was the most quiet in memory. Only two shots were heard, one at quarter-to-eight on opening morning, made by my son, Dave, and the other at 9:40 AM on Sunday morning, made by Jimmy.

That morning, Jimmy’s father was seated in a blind about 250 yards north of Jimmy’s blind. They had planned to head back to camp at 10 AM, Jimmy intending to begin his long trip home and college at noon. It was six-below zero with a bitter northwest wind blowing at 5 AM when they left camp that morning. By 9:38 Jimmy was glad to have an excuse to move about a bit, stuffing loose gear into his packsack attached to his folding stool in preparation for the two-mile hike back to camp. While doing this, he was looking downward, of course. When this task was finally completed, he returned his gaze toward the clear-cut before him, completely devoid of deer all morning. Now, unbelievably, an unsuspecting 5-pointer was striding past his blind only 20 feet away.

This time Jimmy knew exactly what to do. Though only his head was potentially visible to that buck above the upper part of his blind, he had a solid backdrop of natural cover behind him and though his face was covered with a camo headnet (blaze-orange cap on top), Jimmy didn’t move. Not until the buck turned and its head was pointed straight away did he carefully ease his rifle’s barrel over the top tree trunk of his blind. Not until then did he silently cock his carbine as he had practiced at home. Not until then did he center the crosshairs of his scope on the chest of the walking deer and not until then did he fire. At the shot, the buck ran a short distance, stopped and then fell to the ground. 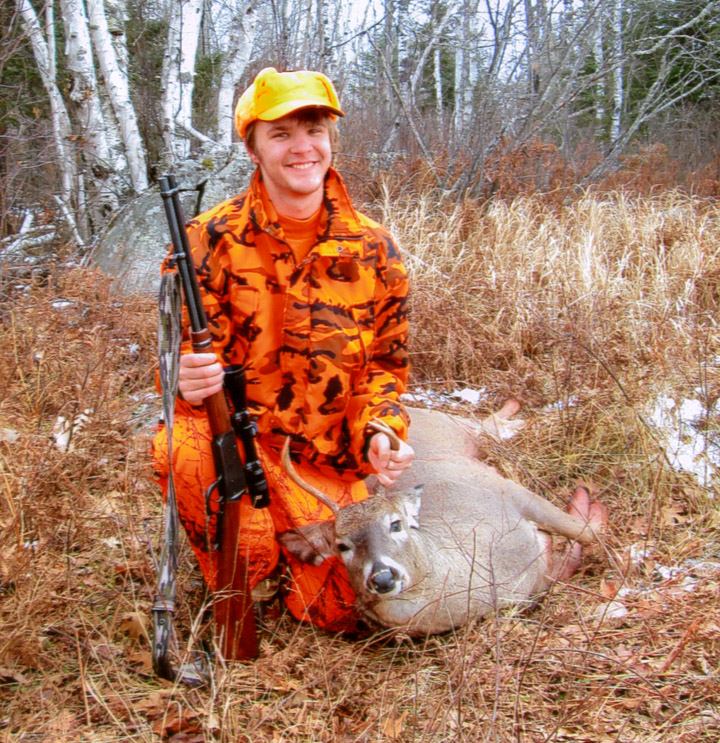 Yes, Jimmy is now a bona fide buck hunter (and an excellent woodsman) and his father and grandfather now know the special pride that is felt when a son or grandson takes his first buck.